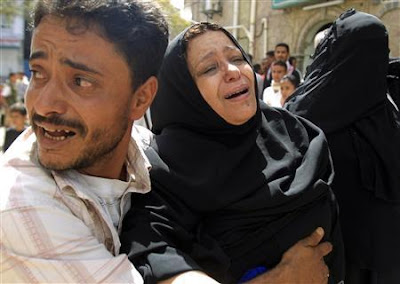 Taiz – the heart of Yemen’s revolution and its unrelenting inspiration – has been the centre of continuous shelling by Saleh’s forces in an attempt to crush the revolution at its heart.
Many times we hear news of shelling on civilian neighborhoods in Taiz or learn about people getting killed or injured, we feel the pain of the city that has given a lot in this revolution for what all Yemenis dream of – A modern civilized Yemen. Many of us get traumatized after seeing graphic scenes of victims that have sacrificed the most valuable thing they have for their country. However, as painful as that is, it is only the tip of the iceberg as the calamities faced by people in Taiz go beyond what we read or watch in news reports. Many tragedies & hardships are incurred by people in Taiz but go unnoticed. The tragedy is indeed indescribable.


Aside from being shelled and shot at, there are economical, psychological, and social impacts to the tragedy faced by people in Taiz. The random shelling on numerous civilian neighborhoods in the city has resulted in displacement of thousands of families creating thousands of internally displaced people (IDP) which has added a new economic burden on the already poor community in a complete absence of a civil state that is supposed to take responsibility and provide for those families. Each day more families find themselves forced to escape for their lives leaving behind property, relatives, friends, familiar surroundings and established social networks. Their anguish and tragedy is indeed overwhelming.  Abdulrahman – whose house was destroyed by shelling, had to flee his house in Al-Rawdha and rent another house in Al-Hawban – a relatively safer area – talks about his struggle:

Luckily, Abdulrahman and his family were slightly fortunate to have some savings that enabled them to deal with the calamity and manage renting a new house and move on with their lives. Many aren’t that fortunate and find themselves left with no choice but to stay face to face with the shelling. Fleeing itself is fraught with peril. Nasser, who fled his house in Al-Hasib, had to wait days before fleeing to ensure his family won’t be a target for regime’s snipers. Due to the unsafe and chaotic situation created by the regime in many areas in Taiz, many victims of shelling were unable to make it to hospitals and were left with no choice but to bleed to death as ambulances and aid were not able to make it while rushing them to hospitals would have been a faster road to death as snipers are just meters away.
The economic effect does not stop at creating thousands of IDP but extend to a profoundly increasing number of unemployment, bankruptcy, indebtedness, and so on. Many businesses have closed down as a result, creating an equally high rate of unemployment and bankruptcy. What used to be a small business and sole source of income for many families has now become a memory of the past if not an outstanding debt some are still required to settle. Many had to resort to borrowing from relatives, friends, or anyone that can lend them any amount of money to help them survive the unexpected hardship. This has created a deeply indebted community that only a miracle can help it recover.
Psychological effects are of no less impact as many have been living in fear for their lives, running away from bullets and hiding from shelling. Thugs employed by the regime are stationed in troubled areas such as Al-Hasib & Wadi Al-Qadhi to shoot at anything that moves. This has created a seemingly insurmountable obstacle for people in managing their daily lives as fear of getting randomly shot at restricts their movements. The random shelling on civilian neighborhoods has a similar, if not greater, effect. It is now quite common to see families in Taiz gather and spend the night in one single middle room that is considered the least dangerous if shells or bullets were to hit their homes. Waleed – a resident of Bir Basha talks about what he and his family go through every night:


“Every night there’s shelling. When it starts, we all (me, my wife, and our 6 children) move into the kitchen and stay there all night long. It is the least dangerous place in our house”

Reports talk of many miscarriage incidents among pregnant women as a result of anxiety, fear and shocks. Many have been traumatized and it will take years for them to recover. Children suffer the most under such circumstances. Children’s trauma will not be easily erased and it will haunt them down for years. For nearly six months, they have been enduring a mounting barrage of shells by Saleh’s forces. If they survive the shells, the calamity of seeing nearby houses getting hit has a significant impact on them. They are terrified and cry every time there’s shelling. Waleed – a resident of Bir Basha also describes the terrifying moments his children go through:


“When shelling starts, the most difficult part for me and my wife is comforting our children and trying to make them stop crying. This happens every night and if they sleep, many times they would wake up from horrible nightmares”.

It is quite evident that there are far more traumatic symptoms children suffer in Taiz. They are more fearful and more anxious. They feel there’s no hope and their only hope for the time being is to stay alive. Schooling and education among children has taken a down turn too. Many children don’t go to school because either the school is closed down or their parents won’t let them leave home because it is not safe to do so. The negative impact of shelling on families is multi-dimensional and its effect will be felt more in the years to come.
Socially, many families have found themselves in the face of a tough life ahead of them. Many people have been killed leaving behind clueless widows and several orphans who do not possess any source of income. Many newly orphaned children had to quit school and start working to earn income for their families. Such a social tragedy will have a profound effect on Yemen and its impact will be felt for years.
Deprivation of basic services such as water, cooking gas, and electricity are the least of the city’s problems. Fuel shortage has hit the city more than any other place in Yemen. Garbage is left piling up in the streets of the city in an attempt to punish the city and its people for standing against Saleh. Kidnapping and illegal detention is undeniably existing. Many families claim one or more of their members have been kidnapped and illegally detained by regime forces. Many are not sure if the detainees are still alive but almost all confirm that they are subject to torture and mistreatment.
The magnitude of the calamities endured by people in Taiz is far greater than what we see. What’s significant is that more than any other place in Yemen, Taiz is paying a very steep price for its revolutionary stance. It’s a matter of personal revenge Saleh is taking against the city that is the heart and unrelenting inspiration of Yemen’s revolution. More calamities and hardships are incurred by the people in Taiz but get overlooked by media which focuses solely on shelling and deaths while the tragedy and its consequences go far beyond that.
Posted by Sam Waddah at 10:50

Sam Waddah
Freedom seeker ... Free I was born and Free I shall live, for there's no greater gift than the gift of freedom